The Cxnterbury Tales – Book 1 of 3 – Tales of Angelic Upstarts

The Cxnterbury Tales is an 80’s punk trilogy written by Mick N Baker, aka “Skinner” and based on his own true life experiences growing up as a Punk in a sleepy village in Hertfordshire UK, dreaming of starting his own hardcore punk band with a few mates..

I purchased all three of The Cxnterbury Tales on Amazon, and I have just finished reading this one, and I must say I really did enjoy it..

I have to admit, that being a teenager myself in the 80’s and a Goth but with 2 brothers that were punk, I very quickly got into the book. The author Mick N Baker does an excellent job in making the reader feel part of the story.. I felt like I was one of his friends, and was part of the story. I laughed out loud numerous times, ‘cos he was describing things we all went through back then.. I laughed out loud when the author tells about the first time he went to a gig to see The Ruts. He made sure he was gonna get a prime spot up-front, and arrived at 5 pm, gig started at 9pm. As soon as the doors opened he rushed to the bar for a pint of lager and took it to the best spot available, smack bang at the front of the stage.. Life was good, and he had the best spot of everyone.. Hours later it started getting busy, and all the good spots were taken.. And then the pint[s] wanted to exit.. Skinner was bustin’ for a piss, but he knew that as soon as he moved an inch, his prime spot would be lost.. LOL, I can just picture it and feel the dilemma.

The book is an easy read, if like myself you are an 80’s kid, it will definitely take you on a trip down memory lane.

The author did a wonderful job with this book, and I can’t wait to start on the 2nd book 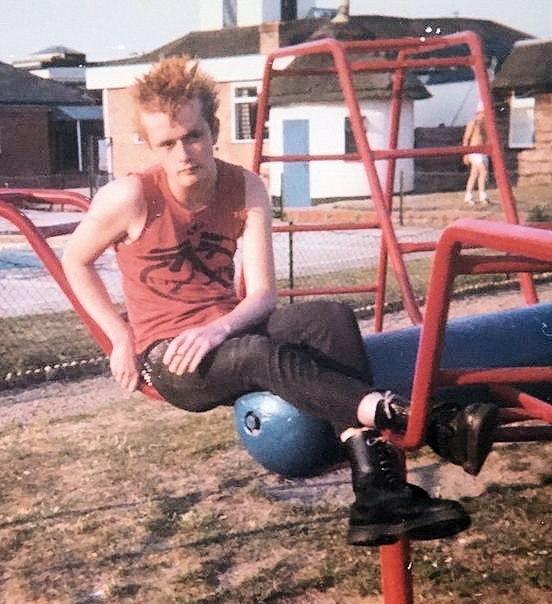 Punk Rock may well have been born in the big cities of the U.K., but the blast waves spread far and wide. I certainly felt it in my little Hertfordshire village, and even though I was too young to get involved in the first wave of punk, I was keen to make my mark during the second uprising that came in the early 1980s

I have written a series of four books called The Cxnterbury Tales, charting the ups and downs of Skinner, as I was known at the time, and my mission to form a Hardcore Punk band in the unlikely setting of a sleepy Hertfordshire village.

A village with many interesting characters, ranging from Alan, Dave our drummers dad, who put himself out on a limb time and time again to help us, to a bitter policeman, and a crazy drunken vicar who tried to run me and Dave over in his car.

Virus V1 the Punk band I tried form with my mates is at the centre of the story, but it’s also the story of us all growing up, the fights, the laughs, the aggro we caused, the parties, the snakebite, discovering girls, and cannabis.

I like to think of the series as a light hearted look back into those great times, but its more than that, it’s about youth culture, the relationships you form with your friends through that culture, and inevitably how that effects your family.