Now I can only speak from my own experience living in the Netherlands in the 80’s and 90’s, but there is abolutely no doubt that the early “Gabber / Hardcore was the LAST sub-culture before “mobile phones” and “internet” changed the way an individual could actually be an individual..

It’s also a definite that a lot / most  Punks, Skins and yes even Goths embraced the vibrant Gabber / Hardcore scene. The 80’s “Dark Clubs” that the Trad Goths / New Wave / Punks would go to to at the weekend either closed down or just went along with the trend… The trend in the early 90’s was definitely House..

In my opinion the Gabber / Hardcore was a GREAT way to end the era of REAL sub-cultures.. 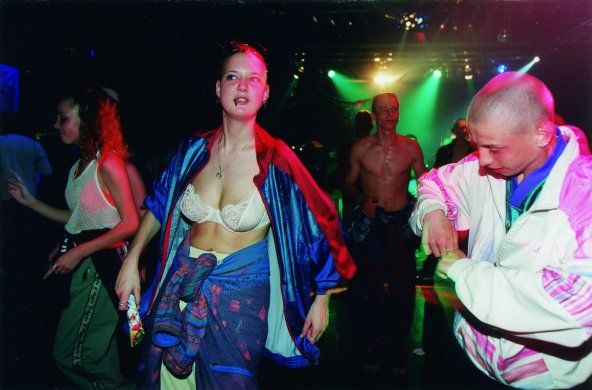 Back in the late 80’s, certain DJ’s were picking up sounds coming from what was called “Detroit Techno” which had been popular in the USA since the mid 80’s..  The “Detroit Techno” first reached Amsterdam in 1988 and was used in a lot of popular songs back then.
It was a year later that DJ’s in Rotterdam started experimenting more with the Techno, adding more bass and industrial, as well as upping the BPM to anywhere from 150 – 190 BPM.. Gabber was born!

The style is derived from the acid house and techno house styles from the late 1980s. It was formally established by DJ and producer Paul Elstak upon founding the record label Rotterdam Records in 1992. Many within the core scene claim that the original gabber style was diluted by 1995, mainly because of a mainstream variant called happy hardcore and, for hardcore fans, because of commercialization which resulted in a younger crowd being attracted to the scene. The commercial organization ID&T helped to make the music popular by organizing parties (most notable are the Thunderdome parties) and selling merchandise. The name “gabber” was used less frequently to describe this music style, especially due to the stigma created in the mid 1990s, but made a resurgence in the mid 2010s.

Gabber is an Amsterdam Bargoens slang (derived from Hebrew chaver) that means “mate”, “buddy”, “pal” or “friend”. The music got its name from an article in which Amsterdam DJ K.C. the Funkaholic was asked how he felt about the harder Rotterdam house music scene. He’s supposed to have answered “They’re just a bunch of gabbers having fun”. DJ Paul Elstak from Rotterdam read this article and on the first Euromasters record (released through Rotterdam Records in 1992), he engraved in the vinyl “Gabber zijn is geen schande!” translating as “It’s not a disgrace to be a gabber!”. The word gained popularity in the Rotterdam house scene and people started to call themselves ‘gabbers’.

Choose a Vibe below and enjoy the Photo Gallery