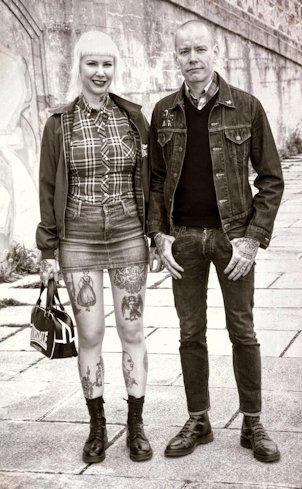 A skinhead is a member of a subculture originating among working class youths in London, England in the 1960s that soon spread to other parts of the United Kingdom, with a second working class skinhead movement spreading worldwide in the 1980s. Motivated by social alienation and class solidarity, skins are defined by their close-cropped or shaven heads and working class clothing such as Dr. Martens boots, braces, high-ankle straight-leg jeans, and simple shirts. The movement reached a peak during an 1980s revival but has endured in multiple contexts worldwide since.

The rise to prominence of skinheads came in two waves, with the first taking place in the late 1960s and the second in the early 1980s. The first skins were working class youth motivated by an expression of alternative values, rejecting both 1950s austerity and conservatism and the more middle class or bourgeois 1960s peace and love ethos and hippie movement. Skinheads were instead drawn towards more working class outsider cultures, incorporating elements of mod fashion and black music and fashion, especially from Jamaican rude boys. The second wave were often ex-punks. Both first and second generation skins were influenced by the heavy, repetitive rhythms of dub, as well as ska, rocksteady, reggae, and African-American soul music. 1980s skins were closely aligned with anarchists and anarcho-punks, first wave punk, Oi! and street punk, ska, 2 Tone ska, ska punk, dub, and hardcore punk. Contemporary skinhead fashions ranges from clean-cut 1960s mod-influenced styles to less-strict punk- and hardcore-influenced styles.

During the early 1980s, political affiliations grew in significance and split the subculture, distancing the far right and far left strands, although many skins describe themselves as apolitical. As a movement that was highly regionalised and excluded by society’s moral norms, skinhead culture sometimes attracted some hard-line political elements and was eventually tainted in the mid-1980s by tabloid hysteria of fringe and violent far-right elements representing extreme nationalism. According to Shane Meadows, “It’s unfortunate that the racist elements have become such a by-word for skinhead culture. The media has played its part in this, but by the same token it’s clear the fascist element has always been fairly vocal in skinhead culture. The sad bit is that the more enlightened, anti-fascist aspects have not better promoted themselves. From the 1990s, the style has been adopted by disaffected, Neo-Nazi youths in the former East Germany, Italy, Spain, Finland, central European countries, and Russia. However, many skinheads have remained influenced by dissident left-wing and center-left type politics that have been in the movement since the beginning, particularly in the U.K. and the U.S.

Choose a Vibe below and enjoy the Photo Gallery